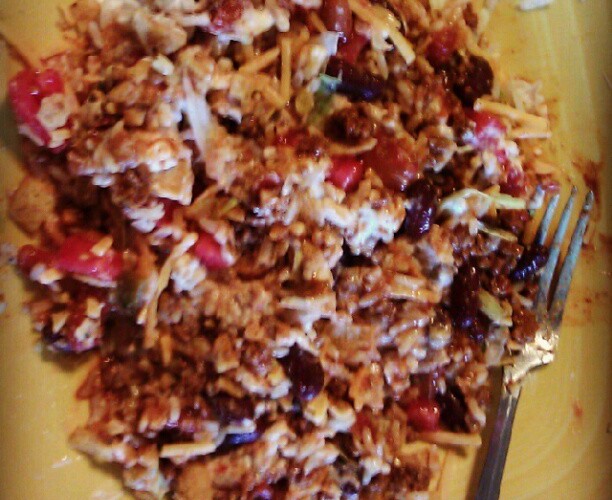 Many of you may remember last summer, I posted a photo of what I referred to as Pile-Ups.  Pile-ups is a dish my aunt and her family brought back to us from Africa.  From my understanding, there are usually more ingredients than what our family typically has with it, but it’s still an awesome meal and one of my mom’s favorites.

Substitutes etc. Notes:  If you’d like, the chili can be simply ground beef with some taco seasoning in it.

Once you have all of the above ingredients, grab a plate.  Put some of each thing on it (but be careful – it’s very easy to make these too large).  The order doesn’t matter because it’s going to be a mashed up pile anyway.  Take out a fork, and go to town.

Please let us know if you’ve enjoyed this recipe!

My mom used to make this a lot when I was a kid.  I’ve always loved it, so I thought I’d share as I made my first one today.

Be careful… because when I read through the recipe the first and second time, I missed the “Cool.” part…  and didn’t stop Drew (who was assisting me) from pouring the 2nd layer on top of this crust right away.  You can put it in the fridge for a few minutes to haste the cooling process, but I would let it air-cool for at least 5 minutes before putting it in the fridge. I would leave it in the fridge till it’s cold to the touch.

When I made this, I wanted it to be a continuous process without pauses, so I rushed it more than I should have.  At this point, I HIGHLY recommend putting the dish in the fridge for about 15 minutes.

Combine and spread over layers when mixture has set.

Call me blonde, but this confused me… because I’m sometimes an idiot when I read directions.  I thought they meant the “mixture” from 2nd Layer when I read this…  It took me a good 10 minutes to realize they meant the pudding.  *facepalm*  If you let the pudding set too much, it will be difficult to spread… just fyi.

I’m not a huge fan of toasted pecans… so I don’t put the toasted nuts.  It’s very good either way.  Just a little too nutty (Haha, nutty!!) with the additional pecans.

Your end result SHOULD have a chocolate stripe down the center-side of the dish… but because I didn’t cool each layer before continuing, mine appears all white.  I swear there’s chocolate in there.

Credit going out to: “The Recipe Swap” compiled by The Sodalitan Sunday School Class of the Royston Baptist Church 1977, Hurley Printing in Hartwell, GA. and to Sarah Duncan & Jeanette Adams

#mc_embed_signup{background:#fff; clear:left; font:14px Helvetica,Arial,sans-serif; width:100%;} /* Add your own MailChimp form style overrides in your site stylesheet or in this style block. We recommend moving this block and the preceding CSS link to the HEAD of your HTML file. */
Subscribe to our mailing list